As busy as we are here at Boomerang getting HAMLET ready to open June 23rd, many of our friends are also preparing or performing exciting new plays that you should definitely not miss. So while you have your calendar out circling your HAMLET dates, find time to check out these five shows as well…

Picking up several years after the events of BLAST RADIUS, SOVEREIGN thrillingly concludes the story of a sister and a brother at mortal odds in a radically changed Earth.

Ronnie is now the battle-scarred Governor of what used to be Florida, everyone’s hero and no one’s friend. Until one night, when Ronnie’s soldiers smuggle into her office the greatest living war criminal in the world: her brother Abbie, the foremost human ally of the extraterrestrials.Action-packed and emotionally charged, SOVEREIGN brings THE HONEYCOMB TRILOGY to a wrenching and unforgettable climax.

Smith Street Stage’s returns to Brooklyn with its first comedy, Twelfth Night. The third annual production of the Shakespeare in Carroll Park series will feature the live music of a horns band and the modern dress of the romantic beach town of Illyria. Most notably, the talented ensemble of classical actors will bring to life the furious, delirious, lovesick and maniacal characters of Shakespeare’s comedy of music and madness.

Twelfth Night will perform for free in Carroll Park at Smith & Carroll Streets June 25th – July 8st at 7:00pm (no Wednesday performances). Audience members can bring their own seating and visit www.smithstreetstage.org for more information. 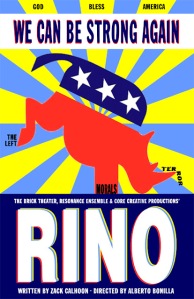 RINO
by Zack Calhoon (Hamlet in Boomerang’s upcoming HAMLET)
Directed by Alberto Bonilla
When Senator Henry Harrison clinches the Republican presidential nomination, the tabloids threaten to scuttle his campaign by broadcasting incriminating footage of his party-girl daughter Halley. As Halley tries to change her ways, both her father’s campaign staff and the GOP at large wage a civil war for the identity and soul of the party’s future, hijacking his campaign just a few days shy of the Convention. RINO is an original comedy inspired by Shakespeare’s Henry IV, Part One, and was a commission for Resonance Ensemble.
CAST:  Matt W. Cody, Arthur Harold, Meredith Howard, Eric Parness, Mark Peters, Kate Siepert, Sarah Skeist, Lauren Sowa
RINO will run 6/13 @ 8pm, 6/15 @ 9pm, 6/16 @ 8pm, 6/17 @ 5pm, 6/29 @ 9pm, & 6/30 @ 3pm as part of DEMOCRACY at The Brick (575 Metropolitan Avenue between Union Avenue and Lorimer Street, Brooklyn). Tickets ($15) may be purchased online at www.bricktheater.com or by calling 1-866-811-4111.
*****

OLIVES AND BLOOD
by Michael Bradford
Directed by May Adrales
It is said in Spain that the dead are always more alive than the day they were born. So it is for the presumed murderer of Federico Garcia Lorca, Juan Luis Trescante Medina. Sixty years after Lorca’s death, the aging fascist, Trescante, fights to hold onto the myth of a murder that defined his life. But in Spain, sixty years is little more than a breath, and a reckoning is all but inevitable.
With Jorge Cordova*, Gilbert Cruz*, Gian-Murray Gianino*, Rey Lucas*, Armando Riesco* and  Kristina Valada-Viars*
$18 General, $15 Student (only available at the box office)
$12 Pre-sale (Use code LORCA12)
June 8th – 24th
Monday, Wednesdays – Saturdays @ 7pm
Sundays June 17 & 24 @ 2pm
Click here.org for tickets
***** 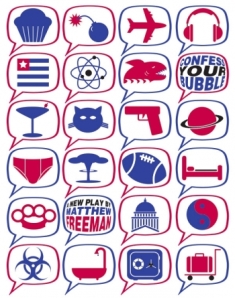 CONFESS YOUR BUBBLE
by Matt Freeman
Directed by Kyle Ankowitz
Due to a plea bargain, Senator Carl Corpuscle, a Democratic Senator from the Great State of Washington (not D.C.) is delivering a speech about his life and views on the government to students at a local high school. Attendance is not mandatory, and only students over 17 may attend. Senator Corpuscle talks about his role in the Democratic Administration, delivers a civics lesson, and offers dire warnings—with slides to illustrate his points.
Starring Steve Burns (TV’s “Blue’s Clues”)
Thu 6/21 @ 8pm, Fri 6/22 @ 7pm, Sat 6/23 @ 5pm, Sun 6/24 @ 8pm, Tue 6/26 @ 8pm, & Sat 6/30 @ 8pm

Again, check out www.bricktheater.com for tickets