The 2013 FIRST FLIGHT  New Play Festival lineup is here. We are incredibly excited to have this lineup of readings to share with you. As you know, the festival goal is to support writers and new work as it develops both in rehearsal and in front of an audience. Please come out to ART/NY and give these new works a listen, so you can say you knew about it first!

Wednesday November 20th at 7pm
OFF TRACK by James Comtois
Directed by John Hurley
So what do you do when your last one-night stand has been found murdered? You venture out to a terrifying part of town amidst a transit strike to find the killer. Or wind up getting stranded and beaten to death in the process, whichever comes first. 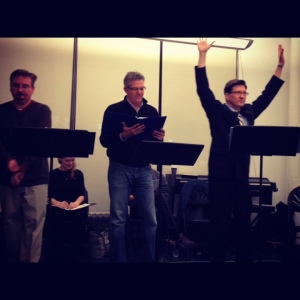 VICIOUS by Zack Calhoon
Directed by Cat Parker
Read through the vantage point of their personal journals, Vicious, maps the the bloom and decay of the tumultuous and star-crossed relationship of Patrick and Emma. Maybe there is a reason why Romeo & Juliet die at the end of the play.

Friday November 22nd at 7pm
GUY STUFF by Rich Orloff
Directed by Linda S. Nelson
Can a recent grad from a small liberal arts college share a house with a bunch of beer-guzzling frat types?  A cross between The Odd Couple and Animal House, Guy Stuff explores the concept of manhood, as practiced by a bunch of guys to whom adulthood is still a new concept.

Saturday November 23rd at 7pm
FAMILY PRACTICE by Michael DeVito
Directed by Tim Errickson
Zoey just graduated from medical school at the top of her class. Her mother is selling the family home, her father is fighting a malpractice suit, and her boyfriend wants to get married. Curing cancer may be the easiest thing she does this month.

Sunday November 24th at 7pm
ANOTHER KIND OF LOVE by Crystal Skillman
Directed by Kimberly Faith Hickman
Rock legend Kit Singer abandons her tour, returning to her family home for a concert celebrating the anniversary of her mother’s suicide. On the night before they are to play together once more, Kit reunites with her former band members, her sisters that she hasn’t seen in ten years. But when Max , Kit’s 15 year old wild child niece, unleashes her passionate desire to play with them – and Kit most of all- the family is forced to face the painful truths that created their songs, their lives, and their very selves.

Please join us to support these exciting new plays!