The third play in our 15th Anniversary Rep Season opens tonight. Having seen some of the dress rehearsals the last few days, I can tell you that you definitely need to catch this one. It is colorful, musical, and witty, played by a terrific cast. We want to see you there!

Amanda, a poor hat maker from Paris, is invited to a chateau by an eccentric duchess to spend a weekend trying to make her suicidal nephew, Albert, forget about the death of his great love, the divine Leocadia. Amanda, it turns out, is a dead ringer for the dead woman, and if she can convince Albert that she is his lost love for just three days, then Albert just might not kill himself. A charming and wickedly funny valentine to love lost and found again. 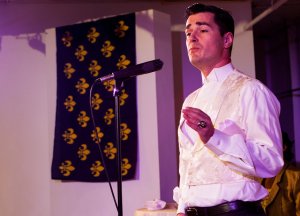