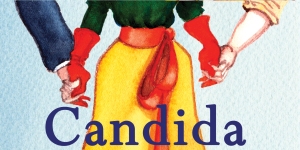 Boomerang’s production of CANDIDA by George Bernard Shaw returns to the stage this weekend for 5 consecutive performances, and we’d love for you to check it out. CANDIDA is a warm, funny story of a married couple who have their ideas of fidelity and intimacy challenged by a young poet. It’s one of GB Shaw’s most popular plays because of it’s great characters and modern sensibility. The cast is terrific, and I would really love for you to see this wonderful production.

Performances this weekend are Friday and Saturday at 8pm, Sunday at 3pm and then Tuesday and Wednesday at 8pm.
You can find more information here and tickets here. Enjoy!