Philip Emeott, director and star of Boomerang’s RICHARD III, wrote about his experiences with the famous crookback.

Tim asked me to jot down my thoughts on directing and playing Richard III in the park.

My first thought: Cutting Richard III down to a manageable park show was like trying to
make a hotrod out of an aircraft carrier. Start with the fact that it’s just freaking long.
Uncut, the show runs over three and a half hours. Sitting on a picnic blanket for that long
isn’t at the top of most people’s bucket lists. The problem with cutting Richard under two
and a half hours is, as Olivier observed, that you run the risk of having only loose ends.
So you have to cut wholesale whenever possible, and get creative. There are a few lines
in there that are more a Emeott than Shakespeare. And lots of characters hit the cutting
room floor. A partial list:

And with a cast of 20 awesome actors we still scrambled to cover the action. We may be 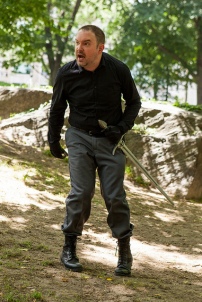 the only production in which Lady Anne comes back as a soldier to fight against Richard.
But that’s all part of the fun!

My second thought: Choosing to both direct and play Richard was either crazy or
brilliant. Crazilliant.

It allowed me to take a stab at one of the greatest roles in the canon, while also deciding
what everyone else had to do and wear. What could be more Richard-like than that? But
directing while acting can be tricky. Richard can’t walk around writing notes all the time
(note to self: make that a “thing” next time). So I was fortunate to have the Charlie’s
Angels of directing staff: Sara Thigpen, Sarah Norris and Christina Ashby. They did most
of the crime-fighting. The cast deserves a ton of credit for going with the flow.

Playing Richard has been a real juggling act of moustache-twirling villainy, petulant
childishness, vulnerable self-discovery, Dickensian self-editorializing and, I don’t know,
the Elephant Man? The process has been interesting. I’m glad we left the mustache
twirling until the end of the process. You can’t do the role without it, but it can definitely
be a slippery slope. Glad we started with the underpinnings, not the melodrama.

Physically, the part is more like an athletic pursuit than a creative one, complete with
padding and armor. Who knew you could sweat so much just by limping around and
shouting at people? Lost a couple inches off my waistline doing this one. Next time can
we do the show before swimsuit season, Tim?

It’s been a real treat to utter words that are just so famous. You open the role with, “now
is the winter…” and close with “a horse, a horse…” (Take that, Hamlet.) Finding
newness and humanity in those words is a great way to spend a summer. Another great
way is to spend it surrounded by talented people who are there to sweat it out with you,
just for the sake of art and fun. To the cast, crew, staff and supporters: thanks for
following the hunch.